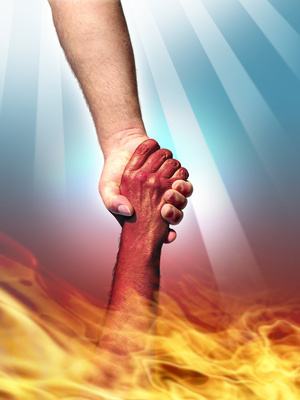 God’s will is for His Kingdom to be established all over the Earth and as such, our good Father does not wish anyone, including all those who have known Him through Jesus Christ, to go into Hell. Here are twelve ways our God can do to protect you from slipping into Hell.

“But I say, walk habitually in the [Holy] Spirit [seek Him and be responsive to His guidance], and then you will certainly not carry out the desire of the sinful nature [which responds impulsively without regard for God and His precepts]” Galatians 5:16  (AMP)

“Now the Spirit of God came on Azariah the son of Oded, and he went out to meet Asa and said to him, ‘Hear me, Asa, and all Judah and Benjamin: the Lord is with you while you are with Him. If you seek Him [inquiring for and of Him, as your soul’s first necessity], He will let you find Him; but if you abandon (turn away from) Him, He will abandon (turn away from) you’ 2 Chronicles 15:1-2 (AMP)

“And with great ability and power the apostles were continuously testifying to the resurrection of the Lord Jesus, and great grace [God’s remarkable lovingkindness and favor and goodwill] rested richly upon them all” Acts 4:33 (AMP)

“This good news of the kingdom [the gospel] will be preached throughout the whole world as a testimony to all the nations, and then the end [of the age] will come” Mathew 24:14

“He who has believed [in Me] and has been baptized will be saved [from the penalty of God’s wrath and judgment]; but he who has not believed will be condemned” Mark 16:16 (AMP)

“Therefore, I strongly urge the elders among you [pastors, spiritual leaders of the church], as a fellow elder and as an eyewitness [called to testify] of the sufferings of Christ, as well as one who shares in the glory that is to be revealed: 2 shepherd and guide and protect the flock of God among you, exercising oversight not under compulsion, but voluntarily, according to the will of God; and not [motivated] for shameful gain, but with wholehearted enthusiasm; 3 not lording it over those assigned to your care [do not be arrogant or overbearing], but be examples [of Christian living] to the flock [set a pattern of integrity for your congregation]. 4 And when the Chief Shepherd (Christ) appears, you will receive the [conqueror’s] unfading crown of glory” 1 Peter 5:1-4 (AMP)

“However, if you have warned the wicked and he does not turn from his wickedness or from his wicked way, he will die in his sin; but you have freed yourself [from responsibility] Ezekiel 3:19 (AMP)

“Now the Lord had prepared (appointed, destined) a great fish to swallow Jonah. And Jonah was in the stomach of the fish three days and three nights” Jonah 1:17 (AMP)

“But God came to Abimelech in a dream during the night, and said, “Behold, you are a dead man because of the woman whom you have taken [as your wife], for she is another man’s wife.” Genesis 20:3

“Therefore, O king, let my advice to you be [considered and found] acceptable; break away now from your sins and exhibit your repentance by doing what is right, and from your wickedness by showing mercy to the poor, so that [if you repent] there may possibly be a continuance of your prosperity and tranquillity and a healing of your error.” Daniel 4:27 (AMP)

“As he traveled he approached Damascus, and suddenly a light from heaven flashed around him [displaying the glory and majesty of Christ]; 4 and he fell to the ground and heard a voice [from heaven] saying to him, “Saul, Saul, why are you persecuting and oppressing Me?” 5 And Saul said, “Who are You, Lord?” And He answered, “I am Jesus whom you are persecuting, 6 now get up and go into the city, and you will be told what you must do.” 7 The men who were traveling with him [were terrified and] stood speechless, hearing the voice but seeing no one” Acts 9:3-7

How to Overcome demonic and witchcraft attacks